Heaven really exists and we live in it !!! It is incredible that just a few steps from our house there are such wonderful landscapes: the five lands will leave you breathless the paths between the rocks and train rides through paradisiacal landscapes!

World Heritage since 1997 for “the harmonious interaction established between man and nature to create a landscape of exceptional quality".

The cinque terre are five seaside villages: Manarola, Riomaggiore, Corniglia, Vernazza and Monterosso al Mare: all overlook the sea, only Corniglia is located on top of a cliff about 100 meters above sea level.

Transparent waters are a contrast to the harsh morphology of the territory, we are in the Mediterranean … but for this is rich in citrus groves, olive trees and vines.

In addition, in the summer, there is also a ferry service that takes you from village to village (except for Corniglia which is located above) through the beautiful sea: a little 'expensive but very impressive! 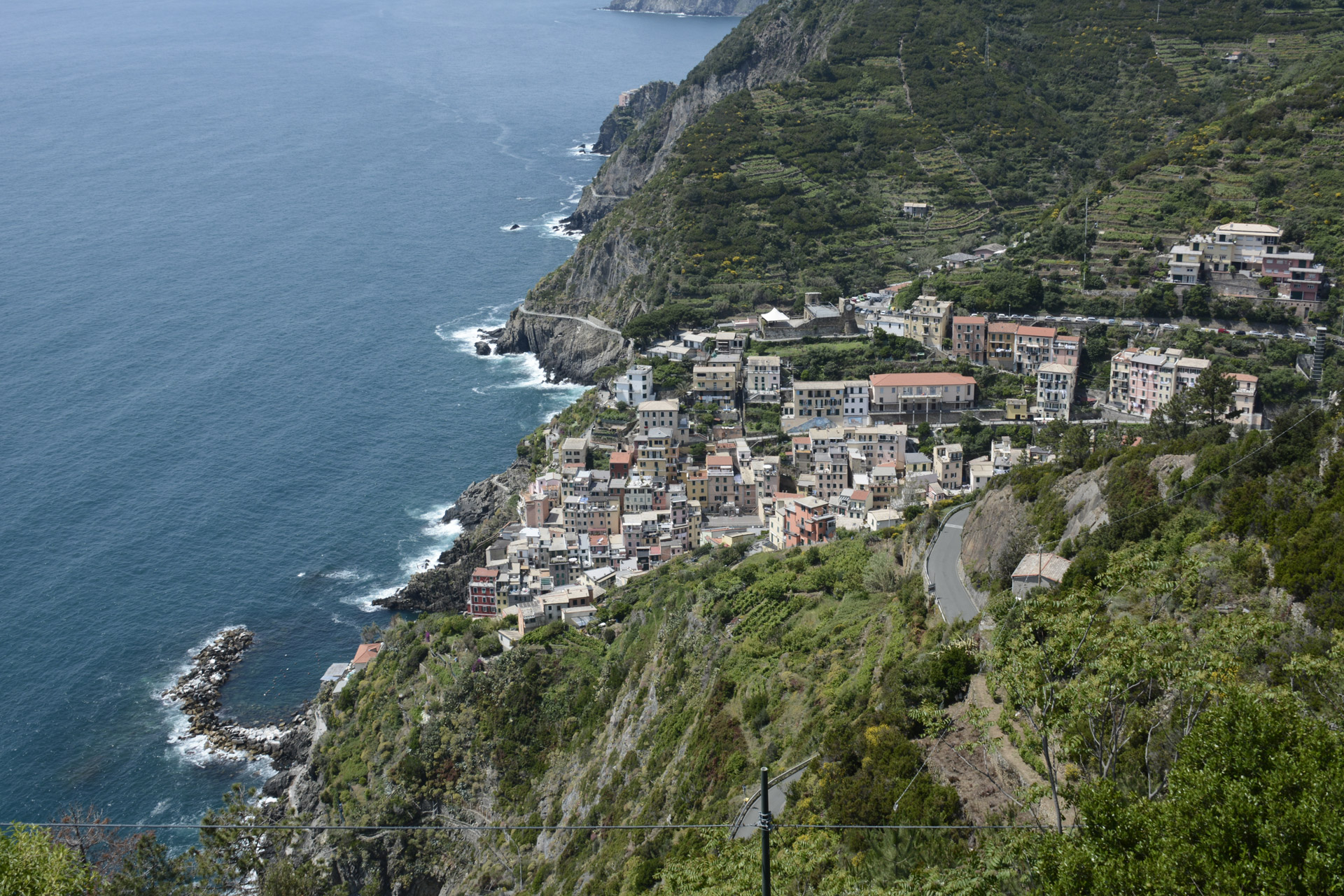 The ancient village becomes a space between two steep hills that descend steeply towards the sea: a vertical show of colored houses.
It is really impressive to walk through the typical streets of this village. All the houses of Riomaggiore have a double entrance: one is on the facade at the height of the alley, while the other is on the back, at the level of the upper street. The houses have this particular structure since 1500 to allow a quick escape route in case of Saracen raids.
Riomaggiore is one of the two leaders of the Via dell'Amore. The trail is incredibly suggestive: rock, Mediterranean vegetation and the sound of waves crashing on the rocks.
Riomaggiore has a castle on the hill of Cerricò, offers a beautiful view of the sea and a lovely parish church of San Giovanni Battista. 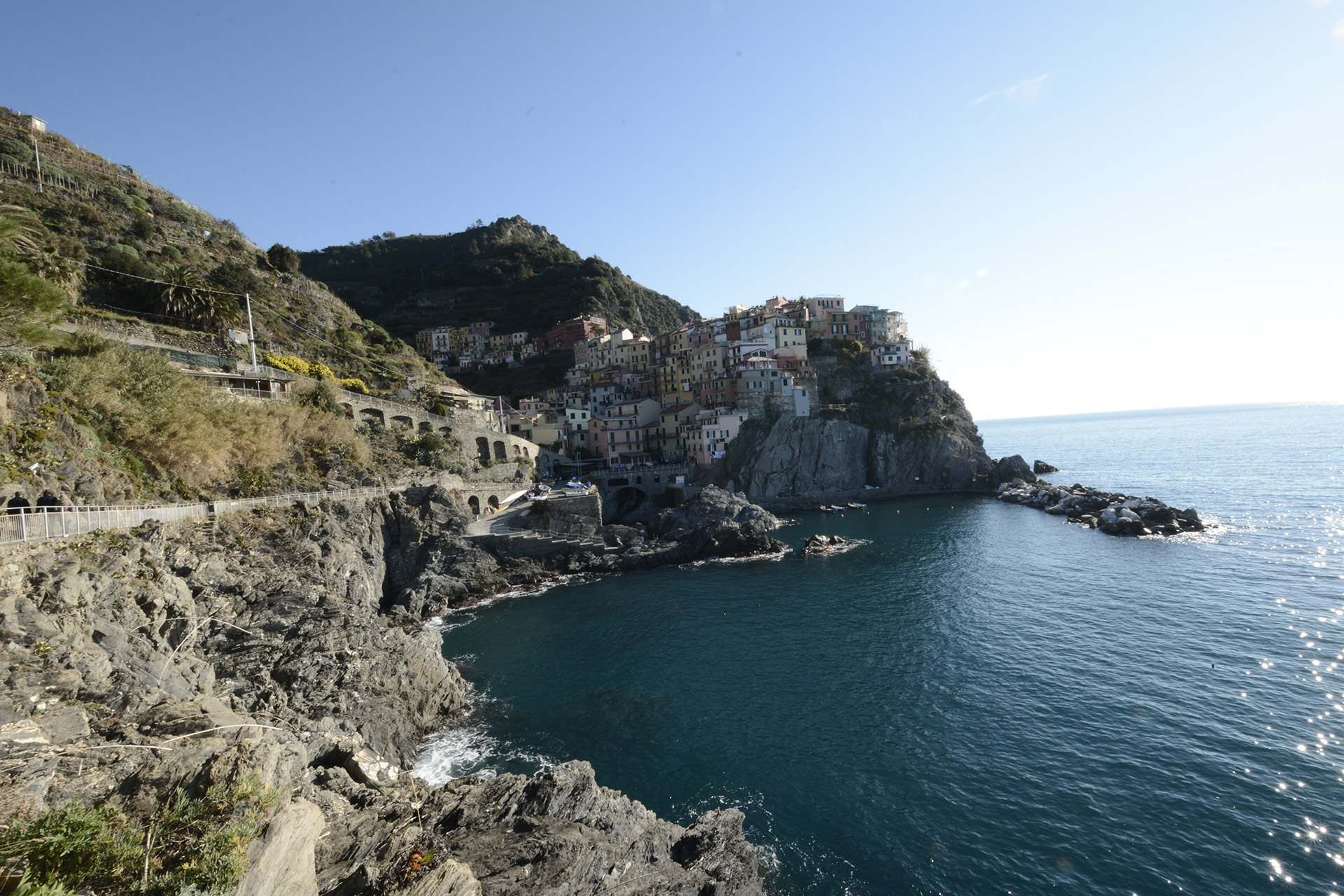 Historians believe that the name Manarola, refers to an ancient magna Roea, or magna rota, a large wheel of a water mill. At the bottom of the town you can still appreciate the old mill. On the upper part of the city stands the Church of San Lorenzo, built in 1338 in Gothic-Ligurian style, consisting of three beautiful naves and baroque interiors.

Do not miss the White Bell Tower, an ancient control and sighting tower, the historic San Rocco Hospital and the 15th Oratory of the Disciplinati della Santissima Annunziata. Obviously sea lovers will not be disappointed: going down to the marina you will find little corners of paradise where you can enjoy a truly breathtaking view. 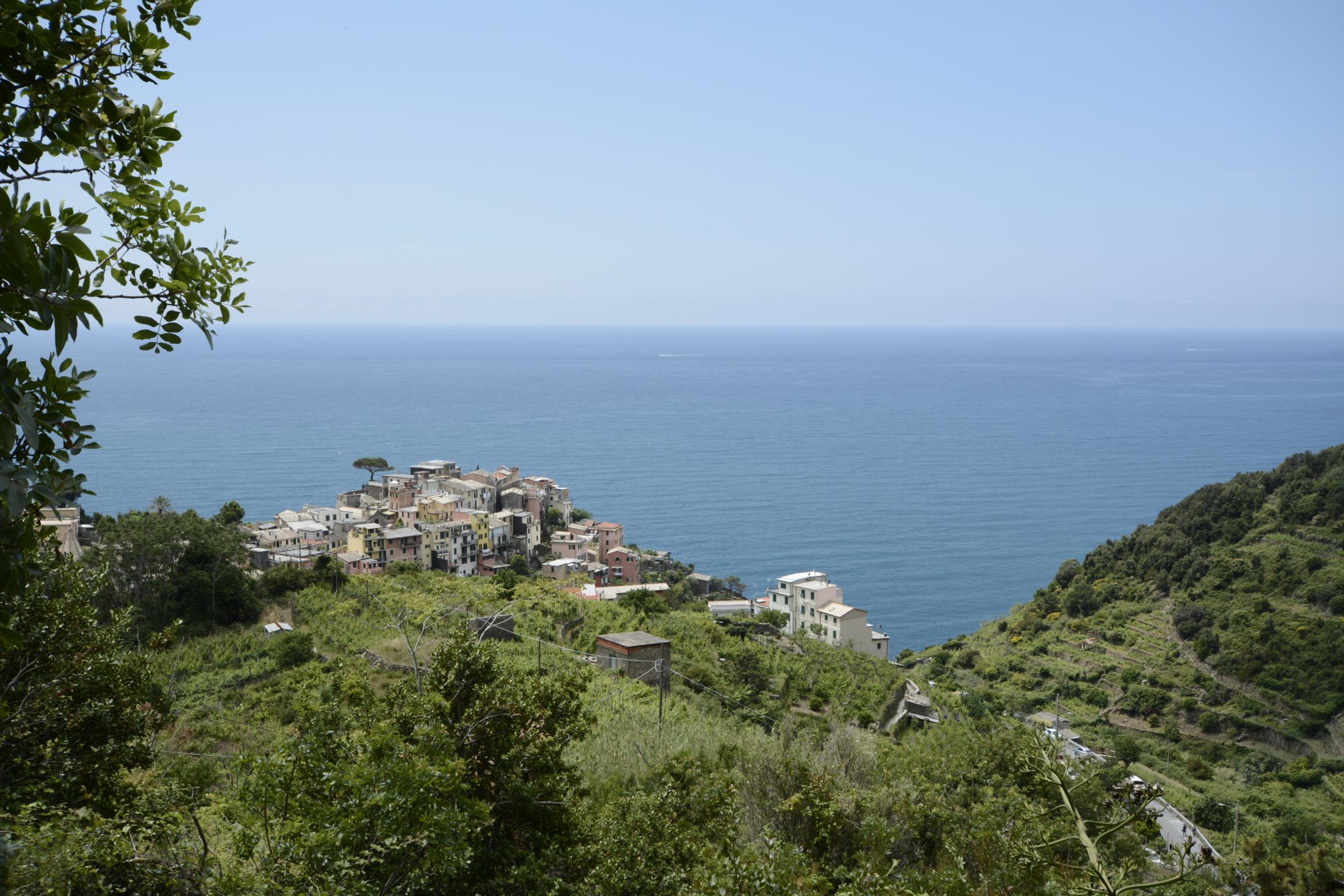 The ancient village becomes a space between two steep hills that descend steeply towards the sea: a vertical show of colored houses.
To reach it you need to climb the Lardarina, a scenic brick staircase, 33 ramps with 377 steps, or cross a road that leads from the railway to the village you can take the bus or go on foot.
In the small village you can visit the interesting Gothic parish of San Pietro and the eighteenth-century square of largo Taragio with its Oratory of Santa Caterina, a small piece of magic.
Corniglia is a precious raw jewel, composed of small alleyways and narrow streets carved into the rock, with a beautiful pebble beach, “the Spiaggione", caressed by a transparent and crystalline sea that you absolutely must not miss. 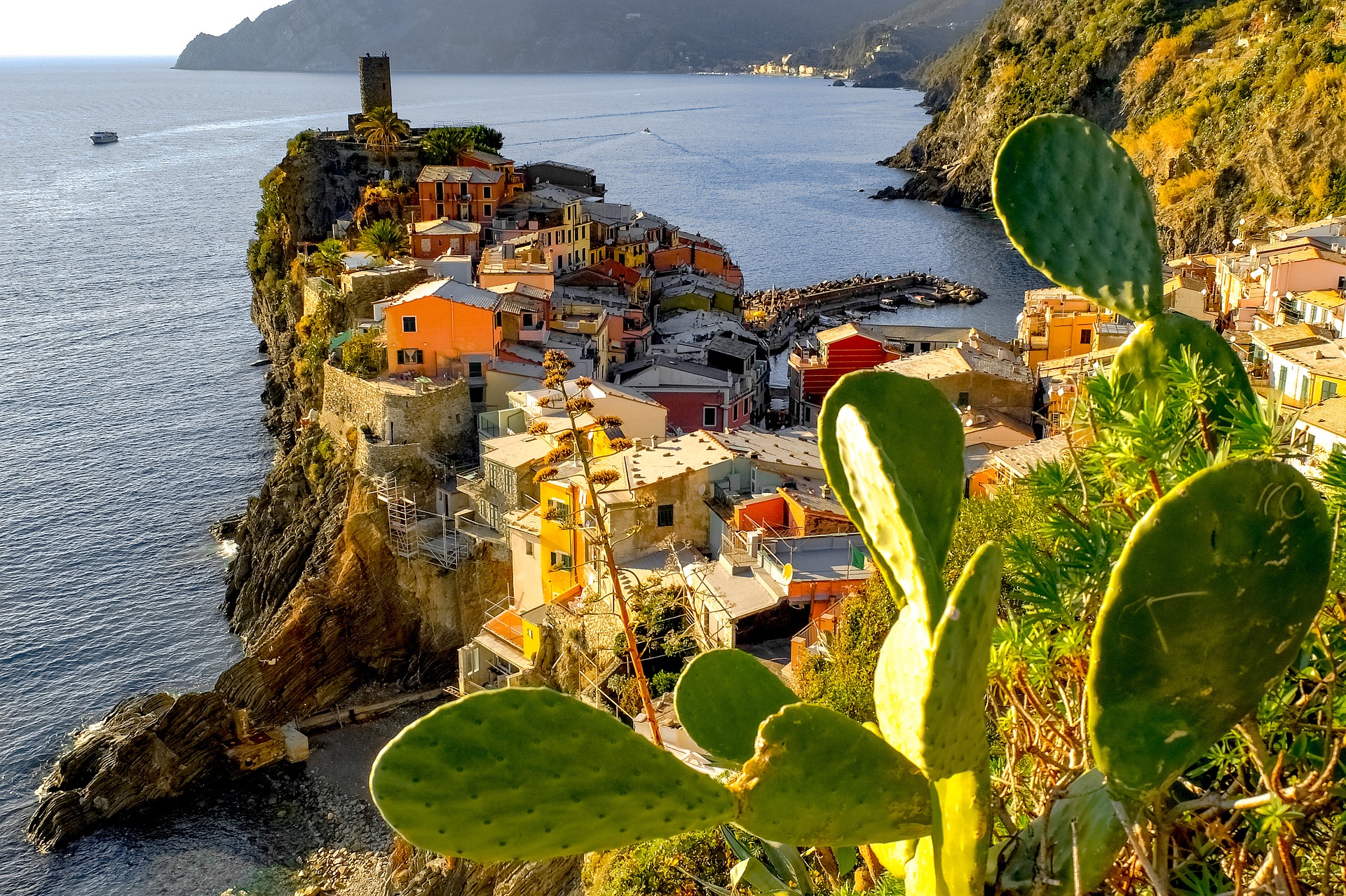 Situated on an imposing cliff, Vernazza now rests quietly, after which in the past it was the starting and landing point of the naval forces that had the task of hindering the passage of the Saracens.
The magical atmospheres and a suspended in time of this charming village will enchant you: mysterious alleys hidden by small and beautiful red, yellow, pink houses, which in summer are crowded with tourists from all over the world. Considered one of the hundred most beautiful villages in Italy, Vernazza preserves intact its long maritime tradition, which saw important sailors and sailors passing through here.
We suggest you get there by sea, perhaps by ferry from one of the Cinque Terre, from Portovenere or La Spezia, the show will be enchanting!
Immediately afterwards you can visit the church of Santa Margherita di Antiochia and the remains of the ancient fortified structure of the city: the sight tower of the XI century, the Doria Castle, the Tower of the Convent of the Reformed Fathers of San Francesco and the Belforte.
Also worth visiting is the Sanctuary of Nostra Signora di Reggio and its tree-lined square that will invite you to meditation, relaxation and tranquility. To get to the sanctuary: you will have to take a road through the Mediterranean scrub, which will make your journey a bit difficult but definitely adventurous and unforgettable. 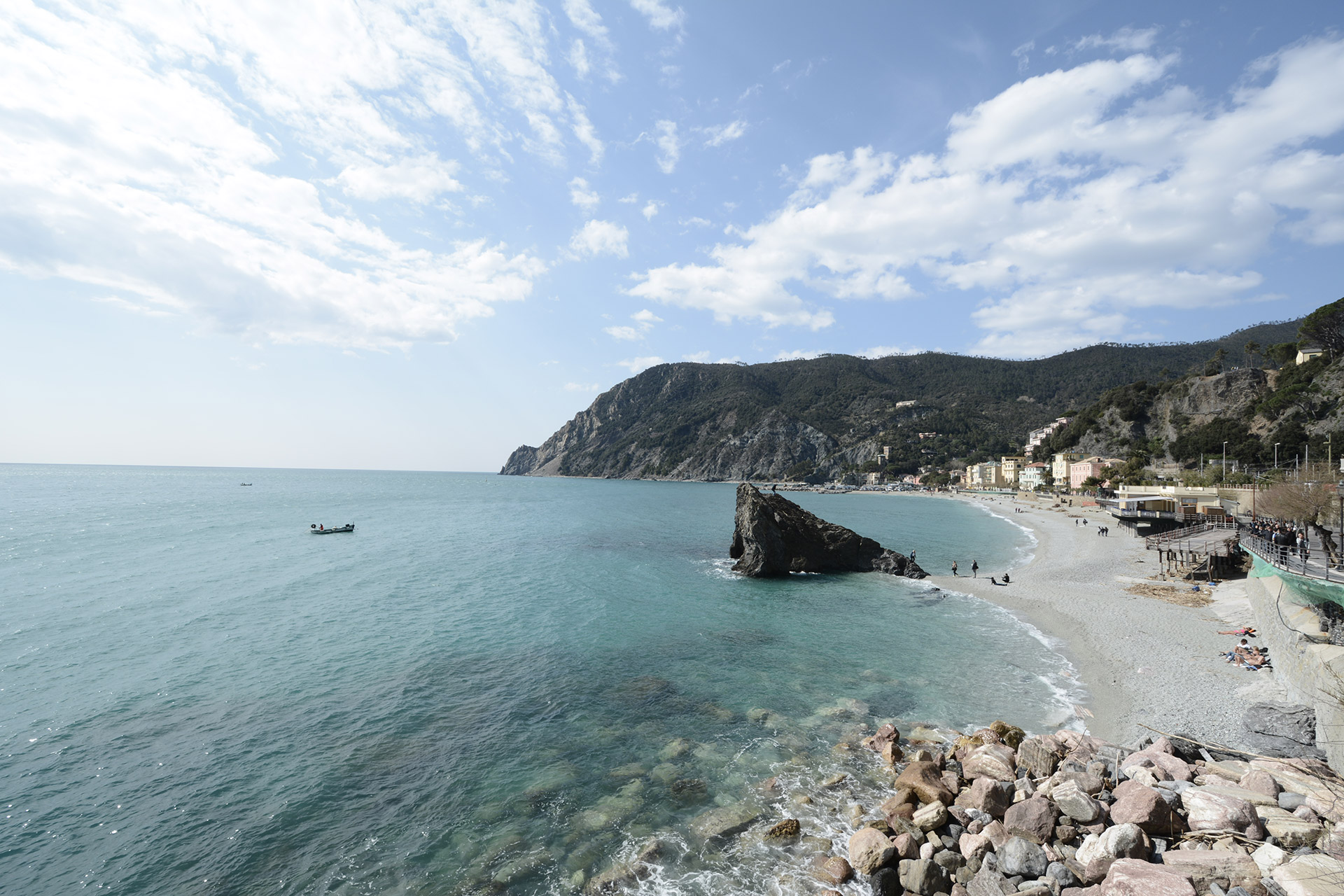 Monterosso al Mare, it is impossible not to mention first who of this country has made its own corner of paradise “Eugenio Montale": the Nobel spent the summer there and wrote the place “rocky and austere country, asylum of fishermen and farmers".
The medieval tower, today bell tower of the Church of San Giovanni, the Castle overlooking the sea, with its three towers, and Torre Aurora, now transformed into a beautiful restaurant, the latter has remained the only one of the 13 towers that in XVI century surrounded and protected the village. In the historical center, you will meet the church of San Giovanni Battista, you will discover the “new" side of Mesco “Fegina", where you will find equipped beaches, and you will appreciate the liberty villa of the Montale family.
To visit over the village by walking or by bus or car, the Sanctuary of Our Lady of Soviore a convent located along the provincial road 38. Among woods and terraced fields near the road between the roads municipalities of Monterosso and Levanto.