Corniglia (Curnigia in the local dialect) is a fraction of the municipality of Vernazza, in the province of La Spezia. It is one of the localities that make up the Cinque Terre, one of the main tourist attractions of the Ligurian Riviera.

Corniglia is in a central position with respect to the other centers of the Cinque Terre. It is different from the other villages of the Cinque Terre as it is the only village that does not directly overlook the sea, but is located on the top of a promontory about a hundred meters high, surrounded by vineyards placed on characteristic terraces with bands except the side that looks towards the sea. To reach Corniglia it is necessary to climb a long staircase called Lardarina, consisting of 33 flights with 380 steps or walk the road that connects it to the railway station.

The origins of the village date back to Roman times; the very name of the village probably derives from Gens Cornelia, a family that owns the territory. It is interesting to remember that during the excavations of Pompeii, wine amphorae were found on which the name “Cornelia” appeared. During the Middle Ages, similar to the neighboring villages, it underwent the dominion of the counts of Lavagna, of the lords of Carpena, of Luni. In 1254 Pope Innocent IV ceded it to Nicolò Fieschi, until, in 1276, power passed to Genoa.

The entire village develops along the main street, via Fieschi, which leads from the parish of San Pietro, to the belvedere of the Santa Maria terrace. Directly under the square of the parish church it is possible to identify on the facade of a house some remains of medieval architecture, including some small sculptures. Continuing along the road you meet the road that forms the square Ciapara (in local dialect ciapà), passing which you enter the carrugio of Corniglia. This narrow street leads to the main square of the village, Largo Taragio (in local dialect er Taragiu) in the center of which is located the Monument to the Fallen, and dominated by the Oratory of Santa Caterina. Behind the church, after a long and steep staircase, you arrive on a small square called “Fosso”, from which the Tower is recognizable, the only ruin of the Genoese fortifications dating back to about 1556. Climbed on top of what remains of this tower, you can enjoy a beautiful view of the sea and the coast towards Manarola.

Another breathtaking view of the entire Cinque Terre coastline can be enjoyed from the Santa Maria terrace (90 meters above sea level, approx.), La Marina reachable from Largo Taragio, continuing along Via Fieschi. In the corner of the panoramic terrace facing Vernazza there was a small church, which fell into the sea in the mid-nineteenth century. On the same side you can see the little golfetto that forms the “Marina di Corniglia”. Also on this side, in the mountains, you can see the sanctuary of Our Lady of Graces of San Bernardino.

From Largo Taragio, in front of the war memorial, 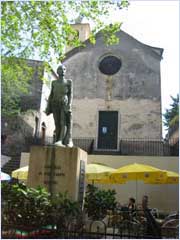 also begins a stairway (via alla Marina) that descends towards the marina of Corniglia. The small and enchanting gulf is characterized by a small port for a few boat-places for the citizens of the town, enclosed to the left by a small pier that juts out towards the sea and on the right from the imposing promontory called the three crosses due to the presence of three crosses in memory of the death of Christ. On the opposite side of this promontory, following the coastline towards Vernazza, you get to the beach of Gùvano: placed under what remains of the railroad wall (which now runs internally to the mountain, entirely in the tunnel) can be reached by sea or via the now disused tunnel of the FS. This stretch of coast is perhaps one of the most beautiful of the entire coast of the Cinque Terre, often a destination during the summer of numerous boats and a naturist brand tourism.

Among the important monuments that it includes, there is the parish church of San Pietro, a shining example of a 14th-century Gothic-Ligurian monument, built on the remains of an 11th century chapel and which, after subsequent revisions, presents inside baroque overlays. Behind the main altar you can admire two colorful stained glass windows, a work by the Trento-based artist Trento Longaretti. A building with gothic arches in black stone, located under the churchyard, is considered part of the ancient post office belonging to the famous Ligurian family of Fieschi. 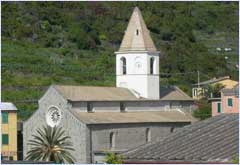 The 29 June celebrates the patron saint, San Pietro. The religious celebrations include the classical procession through the streets of the town, from the Church of St. Peter up to the terrace of Santa Maria. The typical gastronomic specialty of the festival is the rice cake, prepared with rice, cheese, eggs and baked in the oven. Equally typical is the distribution in the square of the Torta dei Fieschi to all the participants at the party. As in many other Italian countries on the evening of Good Friday, the typical procession takes place following the statue of the dead Christ, along the main street of the village.